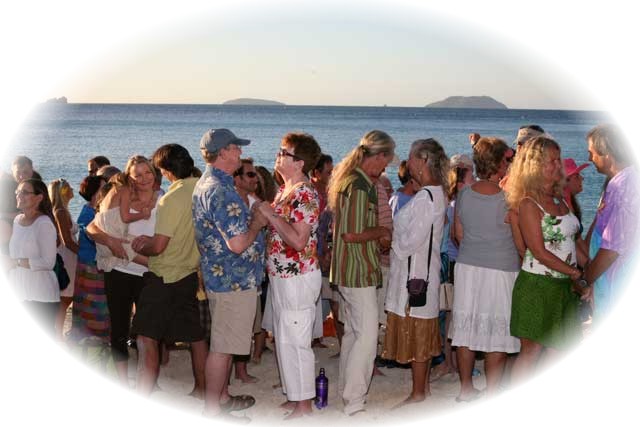 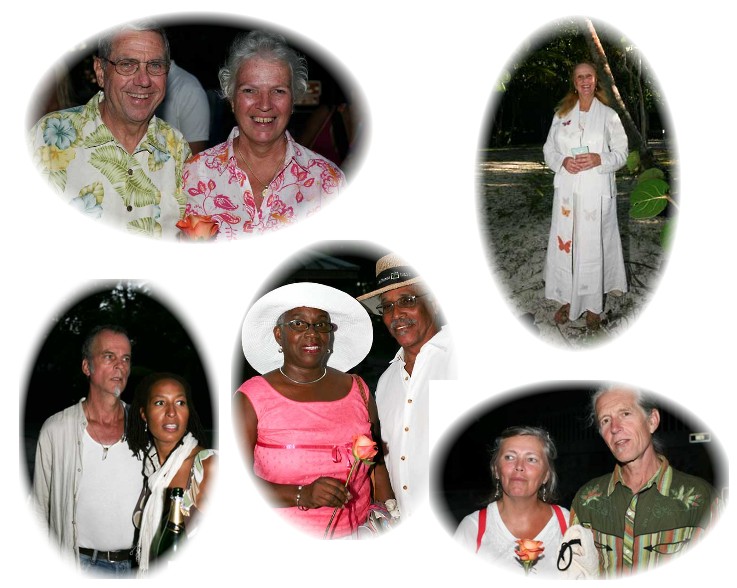 Thanks to Don Blumenthal for the wonderful photography.

Caribbean Connection
I Do. Again! 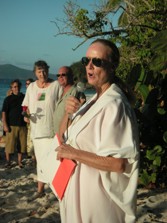 While Valentine’s Day usually harkens images of happy couples canoodling at lavish restaurants, there are many different ways to celebrate the Christian martyr who smuggled letters to his doomed love. When I lived in Italy, the holiday was a national girls-night-out affair. In New York City we’d usually throw a small dinner party for a few friends. Married couples here in the islands celebrate Valentine’s Day by going to a perennially favorite locale – the beach. But February 14th at Trunk Bay isn’t just another afternoon of fun in the sun.

Since 2003, hundreds of couples have renewed their wedding vows in what has become a cherished tradition on St. John. The V.I. Vow renewal was started by Bill and Cathy Dove who were celebrating their own 30th wedding anniversary. The couple thought it would be great to re-new their vows for the occasion. Cathy asked her friend, popular wedding officiant Anne Marie Porter, to do the honors. 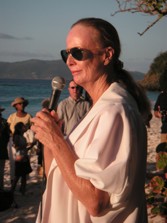 “It was Cathy’s idea to re-new her and Bill’s vows to celebrate their anniversary,” said Porter. “She asked if I would do the ceremony. She also asked if she could invite her church members and if anyone wanted to if they could renew their vows at the same time. I said, ‘why don’t we ask all of St. John to participate?’”

And VI Vow was born. Since then, 550 couples – marking thousands of years of marriage – have gathered at Trunk Bay beach at sunset on February 14th to say “I do,” again. 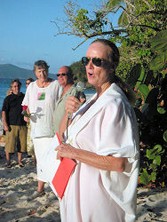 “It’s the most meaningful way for couples to celebrate Valentine’s Day,” Porter said. “The thing that is so delicious about it is that these couples have done all the work. They understand what the commitment means and they let life’s challenges bring them closer together rather than separate them.”

The urge to look into your loved one’s eyes on one of the most beautiful beaches in the world – Trunk Bay routinely ranks among the top ten on those lists – and renew your sacred vows proves irresistible for many couples, even ones who have just tied the knot that very morning. 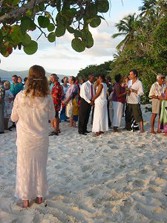 “One year a couple came who I had just married that morning at Hawksnest Beach,” said Porter. “They had heard how great the ceremony is and how beautiful it was at sunset. So they renewed their vows the day they got married.”

Anne Marie gives each couple a certificate of marriage re-affirmation and the ladies are also given long-stem roses. Oh, and it’s all free of charge.
“There’s flute music and it’s just elegant, really,” said Porter. “Everyone there feels the magic.”

Besides Valentine’s Day, Porter marries couples all year long. In her 12-year career, Porter estimates that she has officiated for about 3,000 weddings and vow renewals – as many as five a day – and she still gets excited about each one.
“I don’t get sick of it,” she said. “Every couple is different and every wedding has its own beauty. It’s a joy for me.”
St. John is one of the most popular wedding destination sites in the world, yet Anne Marie – who was termed the island’s barefoot minister by Caribbean Travel and Life magazine – makes each bride feel special.

“I ask what their vision is and what’s in their hearts,” she said. “It’s24 s usually about keeping it simple – barefoot at the beach, no demands, no family expectations, no production. Just a soft, simple, meaningful service. It’s really about them. My intention is to be a channel of blessing for each couple – whatever that means to them.”

Anne Marie claims to never have had a “bridezilla” – or a “groomzilla” for that matter – on her hands. Coming from this calm woman with an excited smile and a sparkle in her eyes, you know she’s not just saying it.

“To be with people when their hearts are open in one of the most beautiful places in the world, it’s a fabulous way to make a living,” she said.

Not bad work if you can get it. Anne Marie presides over vow renewals all year as well, not just Valentine’s Day.

“I always promote couples renewing their vows,” said Porter. “I say make your vacation a honeymoon and remarry your mate. As fantastic as St. John is, it’s something that makes a vacation even better.”

To make your next vacation a honeymoon, check out Anne Marie Porter’s website www.stjohnweddings.com, or www.re-marryyourmate.com 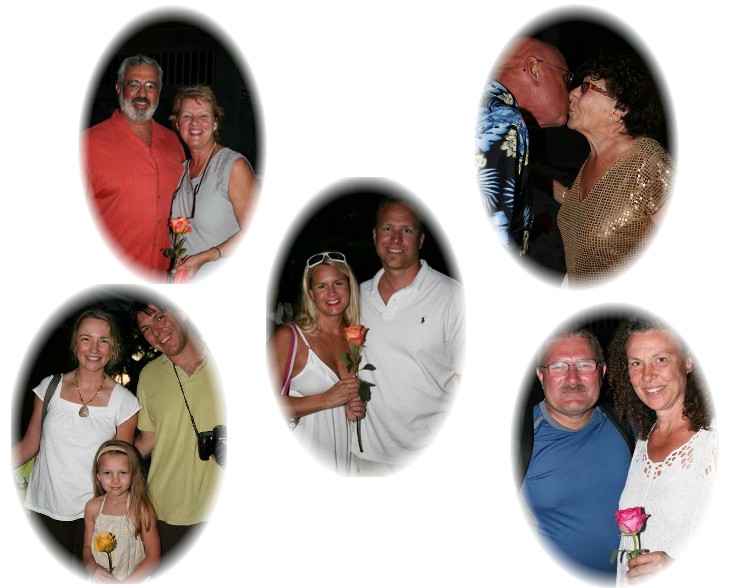 Feb. 14, 2009 — “Today when you say ‘I do,'” said the minister, “it’s with a lot more information.” St. John snowbirds John and Barbara Achzet got the honors for being married the longest — 61 years — at the 7th annual Valentine’s Day vow renewal ceremony at Trunk Bay Beach.

A total of 67 couples, from the Achzets to a pair married that day, joined hands and hearts at the ceremony, presided over by non-denominational minister Anne Marie Porter. Love was in the air, as organizer Cathy Dove urged the couples to say those three little words regularly.

“We need to take that time every day,” she said. 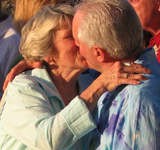 Donna and Chris Bredlow of Moorhead, Minn., will celebrate a half-century of marriage on May 30. The couple is camping at Cinnamon Bay Campground. “We’re very traditional, but maybe this is a newer tradition,” Donna Bredlow said.

With 44 years of marriage on their wedding rings, Dottye and Jay Bessette of Pawcatuck, Conn., agreed that renewing their vows was important to them. “It’s a sexy thing to do after being married 44 years. It’s an accomplishment to make it to 44 years,” Dottye Bessette said.

Andy and Linsey Jewitt of Rapid City, S.D. were first timers at seconding vows. “We thought it was a really neat thing to do,” Andy Jewitt, married 22 years, said.

Bob and Jane Karako, both dressed in pink tops, are three years married. They wed three years ago at Trunk Bay Beach — in pink. “We’re just confirming our commitment to one and other,” Bob Karako said.

Dan Smallwood of Atlanta was ready to renew his vows because he wanted to let his wife, Dianne Smallwood, know how much he loves her. “I waited a long time to find Dianne and I don’t want to mess up,” he said.

St. Thomas residents Mary Ellen and Jesse Thomas married 15 years, were on hand with their children, Savannah, 14, and Gage, 9. Jesse Thomas said he thought the ceremony would be fun for the kids, and, his wife said, “to know their parents still love each other.”

Peggy and David Spoth are new St. John residents who said they found it a wonderful way to spend Valentine’s Day. They were chatting with another pair of St. John residents, Chuck and Terry Pishko. “It’s good to remember why we’re together and set aside a little time to think about it,” Chuck Pishko said. 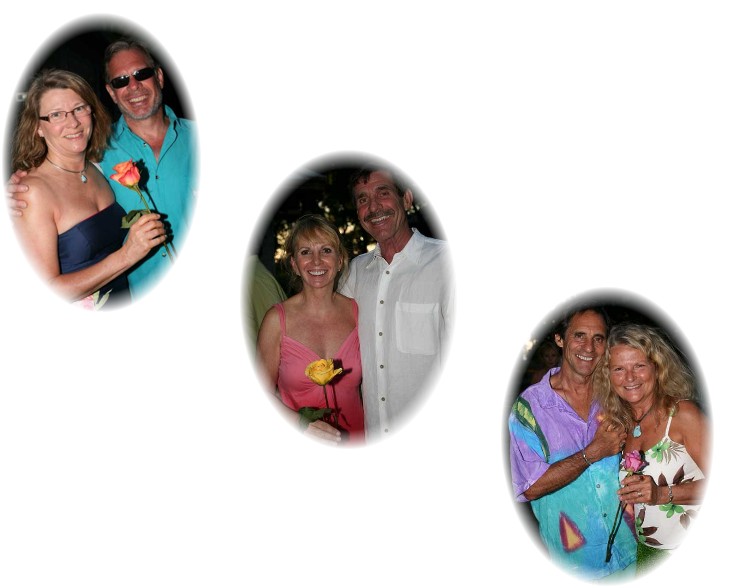 Renew Your Marriage Vows on Valentine’s Day
by Lynda Lohr

Jan. 27, 2009 — Love will be in the air on Feb. 14 when local and visiting couples renew their vows at the 7th annual Celebration of Love at Trunk Bay Beach on St. John.

“It’s a wonderful way to honor their relationship and celebrate Valentine’s Day,” Anne Marie Porter said.
Porter and another St. John resident, Kathy Dove, have organized the vow-renewal ceremony for the past six years.

The celebration is free, and Porter said everyone is welcome. It begins at 5 p.m.
Last year 100 couple renewed their vows. Over those six years, 550 couples have participated, representing more than 8,000 years of marriage.

“There’s something powerful about renewing vows with other couples,” Porter said.

The couples are welcomed as they approach Trunk Bay Beach by Michael Banzhaf playing the flute. Lee Morris and Livy Hitchcock will serenade them as they reach the beach.

Porter, who is a non-denominational minister, performs the ceremony. Each woman will receive a rose and couples go home with a certificate to remember the occasion. 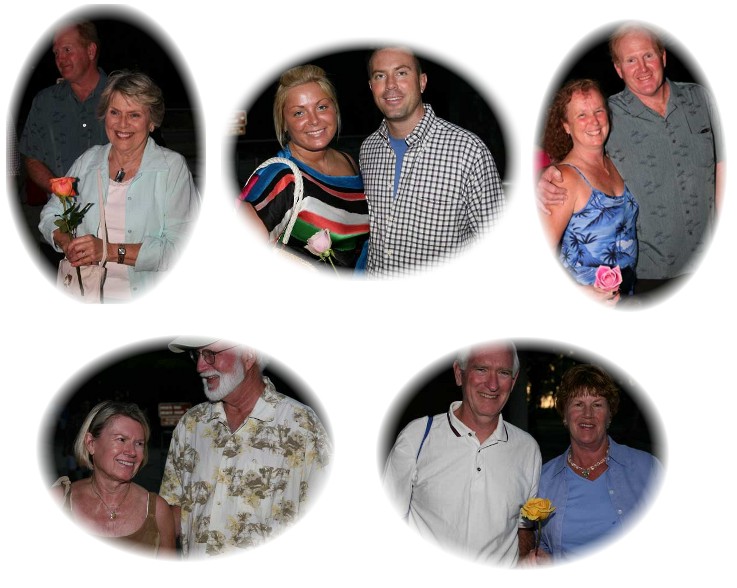