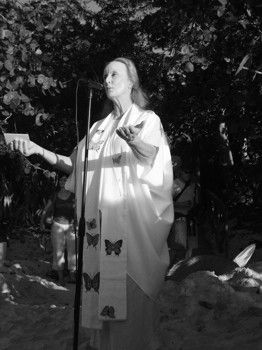 Many and heartful thanks to Anne Marie Porter who officiated at the Renewal of Wedding Vows at Trunk Bay on Valentines’ Day: Anne Marie, you exude love, and everyone who comes within your aura is filled with grace.
-Anonymous 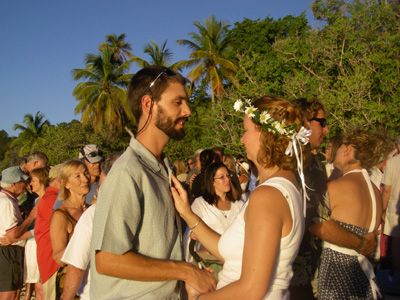 Love City couples like Mollie and Dave Keuten, above, professed their continued commitment to each other and said “I do… again” at the fifth annual vow renewal ceremony.

The afternoon sun cast a shower of golden rays, the crystal-clear Caribbean sea kissed the shoreline and 77 couples gazed into each other’s eyes.

Love City was true to its name on Valentine’s Day, February 14, as couples with a combined 2,299 years of marriage renewed their wedding vows on the white sand beach of Trunk Bay.

Now a St. John tradition, the Celebration of Love, was the brainchild of both Cathy Dove and the “Barefoot Minister” Anne Marie Porter, who held the first vow renewal ceremony five years ago.

It’s just so heart-filled and joyful to see how many people honor their relationships, said Porter. No one takes Valentine’s Day more to the heart as Virgin Islanders. In no town, I’ve ever been to do you know it’s Valentine’s Day like you do here.

More Than Chocolate
The vow renewal ceremony is the opportunity to delve deeper into the meaning of the holiday, Porter explained.

“This takes it deeper than flowers and chocolate,” she said. “It’s truthfully about honoring your partner.”

“I was recently shown just how fragile life is,” Dove said. “Make sure the sun doesn’t go down on your anger and that all those around you know you love them. You can be gone in a second and it doesn’t matter if your 20 or 70.”

Newlyweds to Silver Anniversary
From newlyweds to couples celebrating almost 60 years of marriage, the Celebration of Love attracted a wide range of residents and visitors.

John and Barbara Achzet were still the reigning king and queen of the day, with 59 years of marriage under their belts and counting.

The couple, who have been at every vow renewal ceremony, changed things up this year by dressing more casually.

“I’m not in my long dress this year,” said Barbara Achzet, who wore a matching white and red skirt ensemble. “I’m saving it for next year for our 60th anniversary, God willing.” 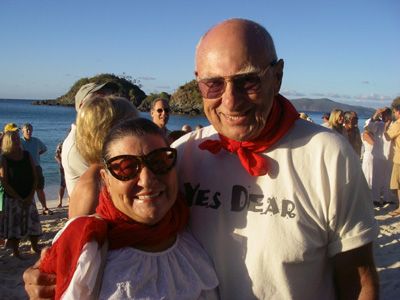 Married for 59 years, so far, Barbara and John Achzet renewed their vows for the fifth time and looked forward to next year.

Yes Dear
John Achzet, on the other hand, wore a T-shirt printed with the saying “Yes Dear” which was the secret to the couple’s long marriage, he explained.

“That and she’s a keeper,” John Achzet said about his wife.

Mollie and Dave Keuten, who were wed a year and a half ago in Michigan, had a different reason for attending the ceremony.

“We always wanted a beach wedding with Anne Marie and we’re moving back to Michigan in a few weeks,” said Mollie Keuten. “We figured this was our chance.”

The day was extra-special for Jim and Bonnie Michaels from Harvey’s Lake, PA, who were celebrating their 16th wedding anniversary. “We got married on Valentine’s Day and honeymooned on St. John,” said Bonnie Michaels. “We just had to come back.” 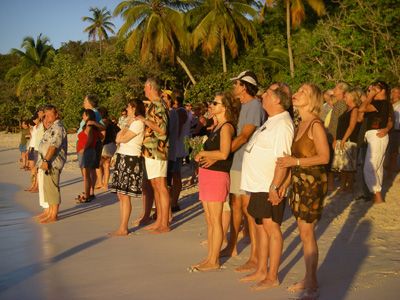 Couples gazed into the Caribbean sea as the Rev. Anne Marie Porter offered an island blessing after the vow renewal ceremony.

Keeping It Simple
For Saffia and Don Durante the reason was simple.

The couples placed their hands over each other’s hearts and pledged their commitment to each other while asking for forgiveness.

I give thanks for this present moment and I am grateful for you, the couples repeated after Porter. Please forgive me for any hurt I’ve caused as I give you my full forgiveness.

Porter then led the couples in the renewal of their vows. With this ring, I wed you anew and with all that I am, the couples repeated after the Barefoot Minister. After Porter bestowed an island blessing, each bride was given a long-stemmed rose as the couples walked off to the sound of Michael Banzhaf on flute.