Vow Renewal at Trunk Bay; Feb 14!
The love couple who started it all! 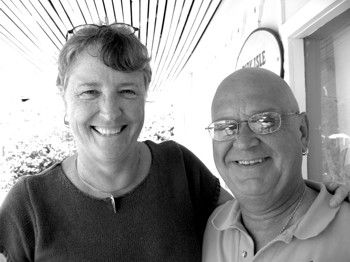 We are always excited about the Valentine’s Day Marriage Vow Renewal at Trunk Bay. If you are married, consider coming to Trunk Bay for this free celebration of love, led by St. John’s lovely Anne Marie Porter.

We love this love event because it is a St. John creation, and so clearly a product of the spirit of Love City at its best.

This year, we decided to see how preparations were going, so we dropped by to see Kathy Dove, co-founder with Anne Marie of the event, at the Book-It VI office in the Lumberyard.

Cathy was working in the back with her husband, Bill, and daughter, Christy, and their two dogs, Lilly and Mandy. She said she was hoping for a great turnout this year at Trunk Bay on Valentine’s Day, and that now, in the event’s fourth year, the organization for the event went pretty smoothly. Cathy said the whole ceremony always fills her with a sense of hope. “When we started this four years ago we had no idea how many people would show up, how many people would come and take part,” said Cathy. “I like the fact that Anne Marie (the famous Minister) always talks about forgiveness. In a marriage, people are bound to do things that hurt their partner, and Anne Marie speaks of letting go of that, and returning to the original bond.” Cathy met her own love, Bill, while running for president of the senior class at Penn State. She became friends with him, and one day left her number on a list of girl’s numbers she found on the wall of his student apartment. When Bill was looking for a date one weekend, there was Cathy’s number at the top of the list. Bill called, the two went out on a date, and then, “the next night I told him I loved him…”

They were engaged, but then something went awry, and they only saw each other three times over the next four years. Then one year when Bill went home for Christmas his mother said, “There is a Christmas card from Kathy. She’s in Hawaii.” Bill called, and the two spent $2,000 on phone calls until Cathy said, “I’m coming to Peoria. We’re going to see if this works.” They were engaged again two weeks later. “People thought we were out of our minds. But we were both grown up now and knew what we wanted,” said Cathy. “And we’ve been married ever since. Bill always backs me. He has that deep caring that supports marriage. And that deep caring is what we celebrate at Trunk Bay on Valentine’s Day.”

And it was on Cathy and Bill’s thirtieth anniversary, four years ago, that a visiting Catholic priest named Father Paul said to Cathy, “You should renew your vows.” “I was sitting with Anne Marie (the minister) at Chilly Billy’s, and she said ‘you should do it and share it with the whole island…”

That first year there were 72 couples. Surprise your partner. Suggest a trip to Trunk on Valentine’s Day. It is fun, free, relaxed, and a beautiful way to reaffirm your love bond called marriage. 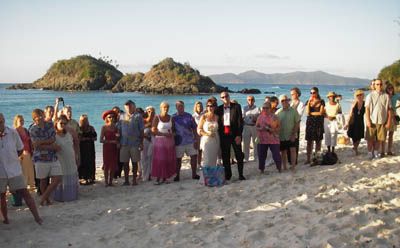 54 couples gathered on Trunk Bay beach to recite their vows to each other on Valentine’s Day.

Fifty-four couples, representing a total of 1,116 years of marriage, dipped their toes into the sand and surf at Trunk Bay in a Tuesday afternoon, Feb. 14, vow renewal ceremony.

The fourth annual ceremony attracted couples who had been married for anywhere from five hours to 57 years.

“Everyone has a rich and delicious story,” said Anne Marie Porter, St. John’s own barefoot minister, who officiated at the ceremony. “I enjoy doing this because it gives couples an opportunity to have a fresh start in their relationship. I do it because it’s a gift that they can give each other and I always focus on forgiveness, gratitude, and a new beginning.”

The ceremony evolved through a brainstorming session between Porter and Cathy Dove, who approached Porter four years ago about performing a vow renewal ceremony for her and her husband Bill’s 30-year anniversary.

Good Example for Youth
“We started talking about how much bad news there was in the papers, and we thought it would be a good thing to do because it would show the youth of our community that there was something other than people abusing one another,” said Dove. “It would show them that there were people who believed in marriage. That was our main thought in this, that it would be a good example for the young people that we have in our community.”

Porter credits the Doves for bringing the ceremony to the community.

“It was really due to the generosity of Cathy and Bill Dove, and their commitment to their relationship, as well as relationships in the community,” she said.

The vow renewal ceremony has been attracting more tourists every year, said Dove.

Better Advertising
“I think they’re finding out about it on the Internet,” she said. “We advertise in some magazines now, like Caribbean Life.”

Porter said that the meaningful experience she provides for couples makes the time, money and energy she puts into the ceremony worthwhile.

“I had a man thank me with tears in his eyes, and say ‘this is the first time that I had looked into my wife’s eyes for any length of time in I don’t know how long,’” she said. “That’s why I do this.”

All Walks of Life
Dove, who spent time talking with the couples before and after the ceremony, said she encountered quite a few memorable people, from all walks of life.

“One woman had been told by her doctor three years ago that she had less than a year to live,” said Dove. “She wasn’t supposed to be there and be taking part in the ceremony. She hadn’t expected to be alive at this point in time.”

Another couple, who were married on St. John two years ago, came back for this year’s ceremony with a new addition—a baby.

“She had just found out she was pregnant when she was here the last time,” said Dove.

Another couple, who have been married for 20 years, brought their teenage daughters to the ceremony.

“I think that’s a wonderful thing to show children at that age,” said Dove. “It’s great to have them take part in something like that, and to see all of these different couples.”

Many couples at the ceremony had participated in the ceremony in previous years, and some had even been married by Porter.

There were quite a few couples there that I had married, she said. One was Nancy and Mark Shekelton.

We have a lot of couples who come to the ceremony year after year, she added.

St. John residents Chuck and Terry Pishko, who have been married for 24 years, have participated in the ceremony for the past three years.

It’s kind of fun, said Chuck. It gives you a nice feeling.

Positive for Community
The vow renewal ceremony benefits the community, as well as the couples who attend, said Porter.