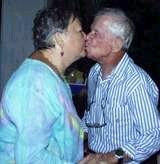 Feb. 14, 2005 –– Married anywhere from nine days to 57 and a half years, 52 couples with a total of 1,206 years, seven months, and nine days of wedded bliss among them renewed their vows Monday at the third annual Valentine’s Day Vow Renewal Ceremony.

It was planned for Trunk Bay Beach, St. John, but drizzling skies forced organizers Cathy Dove and Anne Marie Porter to move inland a hundred feet to the beach’s pavilion.

“Rain on a wedding day is a sign of good luck, and for you, young couples, a sign of fertility,” Porter said as she began the ceremony.

Kerry and Matt Green, married nine days and honeymooning on St. John from their home in Columbus, Ohio, tallied the shortest time married. Kerry Green said renewing their vows was a good way to “memorialize” their honeymoon. She said she was going to solicit advice from those married longer.

The couple could start with John and Barbara Achzet married 57 and a half years. This made them the longest-married couple at the ceremony. The part-time St. John couple was one of a handful who attended the event three years running.

John Achzet said laughing together was the key to their success. “And we never had any children to quibble over,” Barbara Achzet added. Noting that they’ve seen couples get divorced even at their age, Barbara Achzet laughed when she said that neither one of them “had time to train a new one.” She is 76 and her husband, 77.

Dove also had advice for all the couples attending. “The key is work. It’s not easy to live with another person,” she said.

While many of the couples who attended live on St. John, the event also attracts tourists who time their vacation for the vow renewal ceremony.

Cincinnati residents Diane and Reed Shank, married eight years, said they just happened to be on St. John last year for Valentine’s Day, but specifically came this year for the ceremony. “It reminds us once a year why we stay together and why we gave up the grudge list,” Diane Shank said.

Leighton Mears, visiting St. John from Stoneybrook, N.Y. with his wife of 15 years, Mimi, said renewing their vows seemed like a wonderful thing to do on Valentine’s Day. No stress. Not like the first time around,” he said.